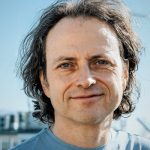 After an unusually long period of price stability, inflation returns and the inflationary pressures is rising on a monthly basis for the global economy. It feels like a thorn in everyone's side - manufacturers and retailers alike. That's because there are a host of problems associated with inflation. But what is less often talked about is that there are also opportunities that inflation makes possible to exploit.

The problems of inflation are manifold:

– Rising costs: Obviously, the problem of inflation is first of all that the own production costs rise due to higher purchase costs and wages.

– Price competition: In notoriously saturated markets, there are many competitive products, alternatives and surrogates. Passing on costs involves the risk of sales collapsing whenever competitors, alternatives or surrogates have not yet done so

– Dependent: Therefore, you are always dependent on how bold competitors are. Sailing in the slipstream of a competitor’s price increase is easy. But who makes the first move?

– Time delay: Even if it is possible to pass on the cost increases, this is done with a long time delay. During this phase, there are large margin losses. If inflation continues, this loss is permanent.

– Percentage calculation: Manufacturers tend to pass on cost increases one-to-one in the price. But a constant margin is a declining percentage of profit as costs rise. Investors look at EBIT as a percentage. 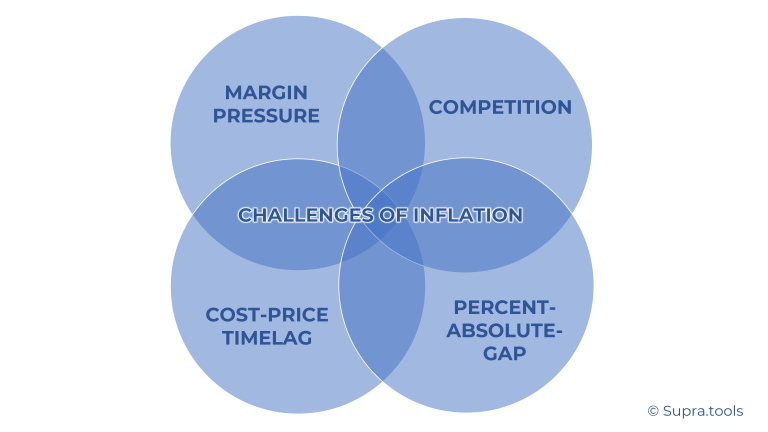 I would like to show in this article how it can be done and what needs to be considered so that manufacturers come out of inflation with an improved rather than worsened profit situation. In detail, I will show that

Procter & Gamble has a long history of evidence-based marketing management. It’s no wonder the company took the 2022 inflation wave in stride.

Moreover, after decades or even centuries of market leadership in many product categories, P&G knows the strategic game of price rounds: It doesn’t require evidence of an existing willingness to pay or competitors to follow suit. A market leader has a duty (to ensure its long-term success) to lead price rounds – no matter what the circumstances. Only the market leader has to take the risk and lead the group.

That is exactly what P&G did.

Global, cross-category brands like P&G have the luxury of being able to test price increases in the marketplace. P&G has tested increases on select products in select markets and closely monitored market response. Price increases averaged 8%. The results were surprising, as there was little consumer reaction.

But even if price testing is an option for you as a brand, you struggle with the question “how much increase should I test?”

P&G conducted the SNOR process described below for key products and came up with two surprising findings overall:

– Consumers are already expecting price increases, and in general, willingness to pay has increased

– The trade-off between increased costs (COGS) and higher volumes at the same cost results in a much higher optimal price point than cost increases would suggest. 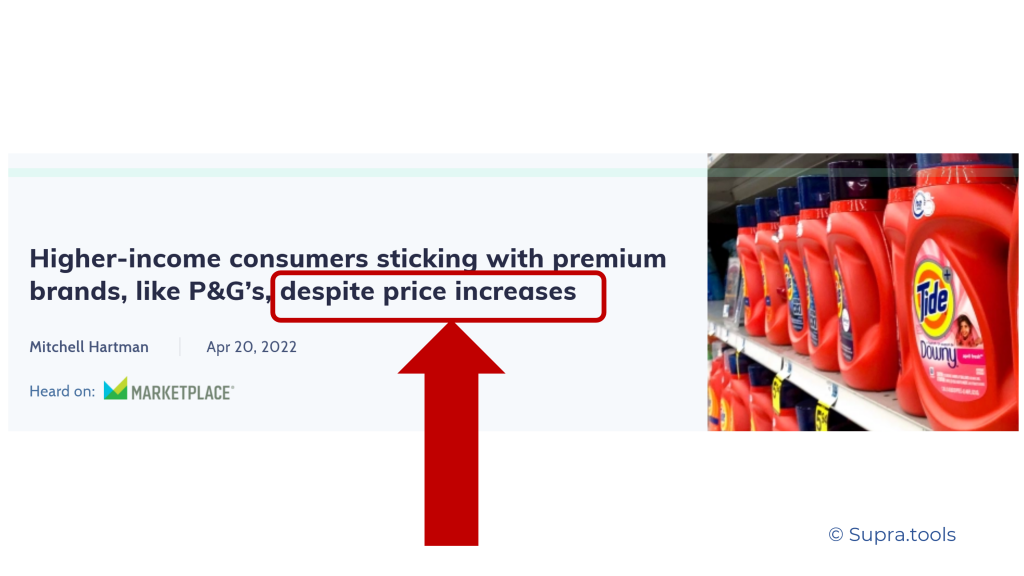 Mastering inflation through the SNOR system

The SNOR system includes the steps of Strategy, Measure Price Readiness (NEW), Optimize Prices (OPTIMIZE), and Act Fast (RAPID). This is how it works in detail:

Competitors and retailers make independent pricing decisions. This is a good thing and, after all, it is also required by law. Behavior on the contrary is legally problematic. In this respect, the content of this paragraph is to be understood as inspiration but should be discussed with your lawyer.

Where is the leeway? Legally permitted is behavior that can be justified on autonomous grounds. With this motivation, each company can autonomously follow autonomous behavioral guidelines for itself, if they are not justified solely by influencing the autonomy of competition.

From this point of view, certain strategic behavior patterns can be considered optimal based on game theory.

– For market leaders, it is always optimal to initiate price adjustments at the earliest possible point in time. This adjustment is substantively justified by the cost situation.

– For small brands (which are not market leaders in a niche) it is usually not crowned with success to be the first to implement a price increase. It is justified that it must wait that larger marks precede.

When a brand is considered a market leader or at least a “big” brand depends on market share and market concentration. The latter is defined by the number and size of players. The Herfindahl analysis enables this consideration and offers norm strategies.

It can be observed that markets have a memory. Brands anticipate the behavior of the competitor. If you don’t dare to follow suit when raising prices today, it will be less likely that the market leader will make the first move next time.

It becomes obvious why these aspects are strategic. 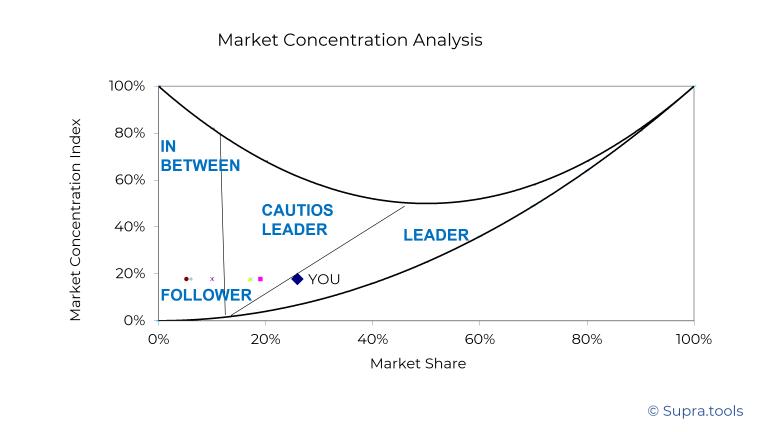 But how high should the price increase be? The answer to this question seems to be logical: In the amount of the cost increase, of course.

Intuition is deceptive here. Why?

However, good optimization is ultimately only possible if price elasticity and, even better, the propensity of customers to react to price changes are determined over a certain range of values.

Elsewhere, I have discussed methods for doing this: Van-Westendorp, Garbor Granger, Conjoint Analysis and Implicit IntelligenceTM are alternatives.

Conjoint analysis is interesting in the inflation context. It results in a market simulation. In this simulation, own pricing moves and possible competitive behavior can be simulated. Unfortunately, it is complex to set up correctly and therefore costly. Furthermore, there are some validity weaknesses.

An alternative is the so-called Implicit IntelligenceTM for Pricing. It addresses the validity weaknesses of conjoint, is easy to perform quickly, and allows for competitive scenarios if they are built into the measurement. 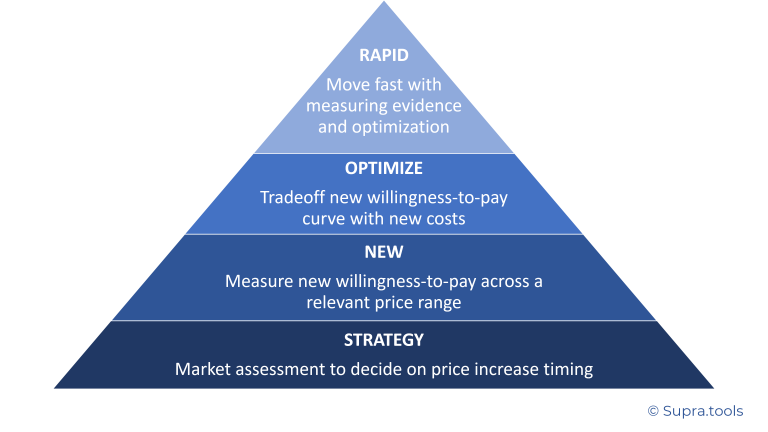 If the price-sales function is known, it can be calculated for each price point which net profit results. The resulting trade-off between sales loss and margin increase cannot be intuitively anticipated in advance. This is mainly due to the fact that the price reaction is usually different depending on the price level (non-linear price-sales function).

Inflation and higher prices of purchase prices lead to creeping margin losses. The longer you wait to react, the greater the profit loss you permanently drag along with you.

This is another reason to rely on agile insight methods to measure the price-sales function. Results need to be available within days not weeks or months. Implicit Intelligence for Pricing methods enables the balancing act of speed, simplicity, and precision.

Inflation forces marketing leaders to make pricing decisions. Rising costs are putting pressure on margins. The longer you wait to increase, the larger the time gap between cost increase and price increase. If inflation persists, margin cuts are a permanent condition.

However, the decision is not trivial, which raises the question of how competitors will react. Intuitive pricing logic (price increase = cost increase) leads to percentage margin losses.

With the SNOR process, it is possible to systematically minimize risks and make evidence-based profitable decisions that integrate both short-term and long-term considerations. 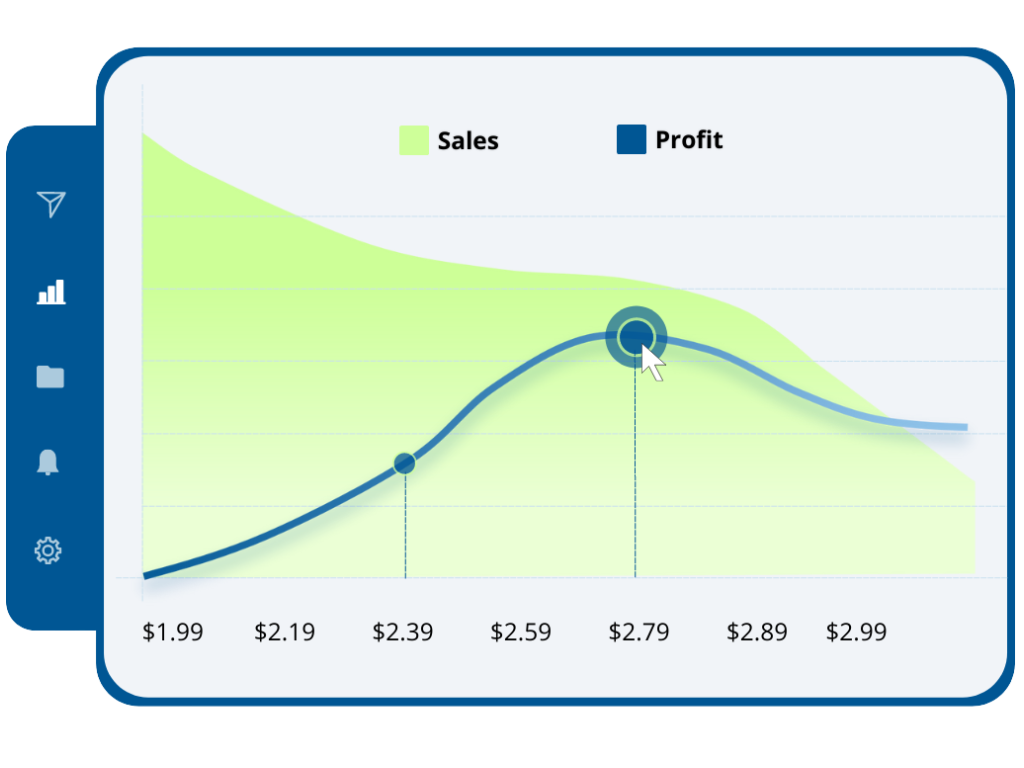 What does inflation mean?

Inflation can also be caused by government measures such as tax increases or money printing (money supply increases). As in the US the Inflation in the “Eurozone” has risen also significantly in recent years due to loose monetary policy by the European Central Bank (ECB). In the last 12 months, the rate of inflation rose sharply. However, this development is not the least due to high energy prices. The European Central Bank justified its decision not to raise interest rates with the low level of inflation in the Eurozone. Background: By lowering the key interest rate, it becomes cheaper for banks to take out loans. The banks are then supposed to pass on the cheap money to businesses and consumers. This is supposed to increase demand for goods and services and eventually raise prices.

Inflation is when prices rise and the value of money falls. Deflation is when prices fall and the value of money rises. Inflation is generally seen as something bad because it means that you can’t buy as much with your money as you could before. Deflation, on the other hand, is generally seen as a good thing because it means your money is worth more.

Inflation is a growing problem for the supply chain. Prices for raw materials, energy, and transport continue to rise, increasing costs for companies. At the same time, customers are increasingly demanding lower prices. This pressure reduces companies’ profit margins and makes it difficult for them to invest in the future.

Some experts predict that inflation will continue to rise in the coming years. Others, however, do not see the problem so dramatically and are talking about “experiencing transitory inflation”. They argue that inflation will increase, but not as much as in the 1970s.

Nevertheless, it is important that companies are prepared for possible inflation problems also only “experiencing transitory inflation” in the supply chain. They can take various measures to do so:

– Strengthen bargaining power with suppliers: companies should regularly check whether they have the best possible terms with their suppliers. If not, they should try to improve them.

– Seek alternatives: Companies should always have several suppliers so that they can react flexibly when prices rise. They can also try to find new suppliers who offer cheaper prices.

– Increase flexibility: Companies should design their products and services so that they can be easily adapted to rising prices. For example, they can spread price increases over several months or use alternative materials.

In recent years, the problems in the US central bank, the Federal Reserve, have become increasingly apparent. The recent crisis and inflation have shown that the Fed is unable to fulfill its tasks without seeking help from other central banks. This situation is particularly precarious because the Fed has less and less control over its monetary policy and thus has no way to improve the situation.

One thing is clear, however: the Fed’s problems are serious and must be solved urgently. Otherwise, another crisis looms, this time perhaps even worse than the last.

Keep updated on the latest Pricing Insights know-how and do-how.

In my email newsletter “Pricing Insights” I cover the whole range of pricing insights solutions-from Garbor Granger to Conjoint, from NeuroPricing to Pricing Software Systems. I describe the application in various fields from new product pricing to promotion, from brand premium to feature pricing.

Keep up to date here.